100% Outrider is an Outfit or Cosmetic Outfit in Genshin Impact. Outfits for Genshin Impact are an equipment category of the game that are usually featured in special events or purchased via the Character Outfit Shop. These change the appearance of a Playable Character that can be previewed and worn in the Dressing Room. Outfits are purely cosmetic, and add no real stats or strength to any character that has them equipped, meaning they are not helpful in progressing the game.

Amber's outfit. This is a more formal — but no less cool — version of the Outrider's uniform!

How to Unlock 100% Outrider Outfit in Genshin Impact

Listed below are some unique voice lines of Amber when they are wearing their alternate outfit, 100% Outrider.

In the last three months, Amber has had a bone or three to pick with Wolfhooks. While out scouting, her uniform and stockings were torn by their sharp hooks, and unfortunately, her schedule was such that there was no time to get them fixed.
The Knights' logistics division gave her 3 sets of uniform of the same type initially, so wearing one out was not exactly a major emergency. But Amber loved those three sets quite dearly, and would have been quite upset regardless of which one was torn.
Even Baron Bunny had his design based on these uniforms – Amber recalled, with a twinge of sadness.

So when her mission ended, Amber would attempt to sew the damaged uniform back together, but despite her excellent skills, the marks of her needlework remained stitched into the fabric.
However, Amber would obtain a new uniform not half a month later at the Knights' end-of-year meeting. It was a fair bit more official, the craft was more ornate... And it was also stated to be more hook-proof than the previous version. ''On behalf of the Knights of Favonius, I'd like to present you, our one and only Outrider, with some new clothes! Thanks for all you've done for us so far.'' So Hertha, their logistics captain, had said. 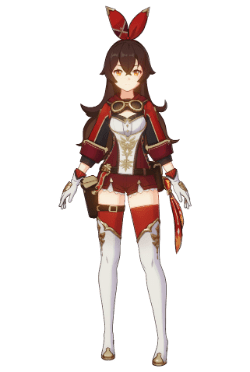