Gunnhildr's Legacy is an Outfit or Cosmetic Outfit in Genshin Impact. Outfits for Genshin Impact are an equipment category of the game that are usually featured in special events or purchased via the Character Outfit Shop. These change the appearance of a Playable Character that can be previewed and worn in the Dressing Room. Outfits are purely cosmetic, and add no real stats or strength to any character that has them equipped, meaning they are not helpful in progressing the game.

Jean's outfit. This classic knight's ceremonial outfit is suited to all manner of occasions.

How to Unlock Gunnhildr's Legacy Outfit in Genshin Impact

Listed below are some unique voice lines of Jean when they are wearing their alternate outfit, Gunnhildr's Legacy.

"Big Sis, these clothes are yours, right? I found them while sorting things out in the room..."
The folded ceremonial clothes in Barbara's hands had the Knights' crest on it, which shone with a golden light as it caught the sun's rays.
It looked familiar, true, but Jean was very sure that she had never owned such a set of clothes before.
Come to think of it, the uniform she usually wore was hand-sewn by her mother.
"Wait... could that be yours, Mother?"

Frederica smiled as her daughter asked this question — a rare sight to see on her face.
"Ah, it's been so long. So, Seamus still kept it, huh?"
"Those were the clothes I wore when they granted me the title of 'Alder Knight.' You can take them, if you don't mind."
The seedlings of yesteryear have grown strong, and with their shade they shelter the land they know so well.
The glories of the past have been passed on, and they shine every brighter for it.
They saluted each other first as knights would — then immediately embraced as only family long-overdue for a reunion might. 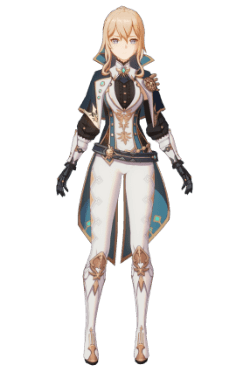