Opulent Splendor is an Outfit or Cosmetic Outfit in Genshin Impact. Outfits for Genshin Impact are an equipment category of the game that are usually featured in special events or purchased via the Character Outfit Shop. These change the appearance of a Playable Character that can be previewed and worn in the Dressing Room. Outfits are purely cosmetic, and add no real stats or strength to any character that has them equipped, meaning they are not helpful in progressing the game.

Keqing's formal wear. Amidst the beautiful dawn of the Lantern Rite, the threads weaved by days of hard work intertwine into a light yet magnificent appearance.

How to Unlock Opulent Splendor Outfit in Genshin Impact

Listed below are some unique voice lines of Keqing when they are wearing their character outfit, Opulent Splendor.

Satins with an exquisite texture weaved with ancient techniques and made from carefully selected petals of half-blooming Silk Flowers; dye extracted from Violetgrass of purest mulberry, ideal for recreating the ethereality of ancient paintings; something Liyue and something exotic fused together to create a unique style, with interlaced threads sewn through a hundred days of work, fine like gossamer brush strokes across a canvas.
The dress is perhaps Keqing's most luxurious outfit. The story behind it is also rather fascinating—
Since her first day as the Yuheng, she has never enjoyed its privileges but has instead devoted much private time to her duty. To improve work efficiency, Keqing prefers a dressing style that prioritizes practicality and only keeps a minimum level of embellishment. Therefore, though like a flower she blooms, she used to dress simple.
However, working closely with Ganyu and then Ningguang has given Keqing a sort of epiphany—
Keqing accepts that she cannot work day and night like the half-adeptal secretary Ganyu. She also knows Ningguang's way well, who often takes a bath after work to withdraw from the moment. By temporarily putting the crazy agenda aside for the next day, Ningguang thus allows herself to fully relax.
Keqing understands that to lead the tide of change requires not impatient leaps and bounds but care for one's body and mind. Good maintenance keeps one going smoothly.
Ningguang also gave Keqing similar advice:
"You've never donned anything special for festivals, and people are used to your image as it is. But Liyue is different now. If you show up in front of the public in a new look, it will add to the merrymaking and inspire everyone greatly."
Keqing was aware of that, but she just wanted to transform silently so that she wouldn't worry her colleagues.
Her attire for the Lantern Rite would serve as a good start.
"This attire marks the line between my work and life. By striking a balance between the two, I will find a comfortable pace at which I shall lead the way into a new Liyue."
Having made up her mind, Keqing had Ningguang's personal tailor make her a dress that still keeps luxury to a minimum. With the attire finished, Keqing threw herself back into the preparations for the Lantern Rite.
As for how she ended up overworking herself again, accidents like that do happen, occasionally.
While conversing with the Traveler again in the Jade Chamber, their caring advice reminded Keqing of the decision she had made not long ago. A faint smile formed on her face.
Perhaps this is what they call the tacit understanding between ideal companions, who are always on the same page.
She put on the long-readied attire and spoke gently to the Traveler, who looked her way. Having received generous praises, she turned to the blooming fireworks.
The light of festive fireworks set her dress aglow like a star in a dark night. The hem of her dress danced at her steps like flowers flowing in a gentle breeze. 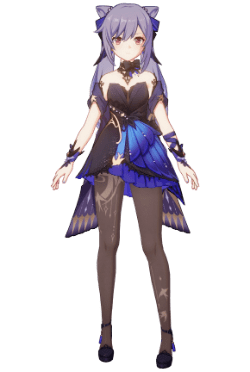