Orchid's Evening Gown is an Outfit or Cosmetic Outfit in Genshin Impact. Outfits for Genshin Impact are an equipment category of the game that are usually featured in special events or purchased via the Character Outfit Shop. These change the appearance of a Playable Character that can be previewed and worn in the Dressing Room. Outfits are purely cosmetic, and add no real stats or strength to any character that has them equipped, meaning they are not helpful in progressing the game.

Ningguang's formal wear. The long cyan skirt traces her elegant curves, and the butterfly wings at her ankles lend the outfit a touch of light grace.

How to Unlock Orchid's Evening Gown Outfit in Genshin Impact

Listed below are some unique voice lines of Ningguang when they are wearing their character outfit, Orchid's Evening Gown.

Ningguang, the great mover and shaker of Liyue's mercantile spheres, always seems to have a confident, steady smile on her face.
But even she cannot escape the vagaries of depression, reluctance, loneliness, and other anxieties that trouble the ordinary people of Liyue.
Once, when Liyue Harbor teetered on the brink of a crisis, Ningguang was forced to sacrifice her Jade Chamber — the sky palace she had built up for many years through much sweat and tears.
All the memories of her past, sweet or bitter, were cast into the ocean with the Jade Chamber, and there they sank. Even one such as Ningguang could nary bear the loss.
Even after the dust had settled and the opportunity to rebuild the Chamber came, she still spent much time in troubled consideration.
Many things happen in this world — who could say when great loss might loom?
Each time she thought on this, she would feel depressed.

As the banquet in the skies began anew, Ningguang stepped forward in her indigo dress to invite the gathered guests to celebrate with her.
Yet amid the revelry, amidst the sea of famous relics, precious trinkets, fine cuisine, and the cries of joy and laughter,
Liyue's Tianquan was once again gripped by melancholy.

Leaving her seat, she stood under the night sky with a clouded heart.
The sounds of cheer within the pavilion could no longer be heard from this far away — it was as if she were alone under the stars.
As she often would in past, she gazed down at Liyue beneath her feet—
The faint moonlight seemed to be cast about Liyue's face like a veil. From Bishui Plain to Lisha, the land was painted a magnificent, gentle white.
This was a sight that Ningguang was most familiar with. Ever since the Jade Chamber was completed, she would gaze upon this majestic view every night.
Time flies, but the mountains and seas remain.

"The mortal world is fleeting, but there are things that will not change so easily."
"A hundred years from now, perhaps, all things might be different. But then, my beauty would have faded, my body reduced to withered bones."
"This garment, too, will by then have grown dull, no matter how opulent it may have been in its prime."
"But so long as I live, riches uncounted shall be at my disposal, as shall the Tianquan's authority, so vested in me."
"I will live this life to the full — lacking not at all for power, wealth, or friends."
"Was this not what I resolved to do from the beginning? If so, then how could I simply allow myself to fall into this pit — to lose my wits because of a moment's emptiness?"
"Life must be treasured precisely because it is fleeting."
"But a thousand, even ten thousand years from now, those who come after will remember this name — Ningguang."

As she returned to the feast, her heart was clear.
And when she emerged before the crowd again, the Tianquan Ningguang wore that calm, self-assured smile once more. 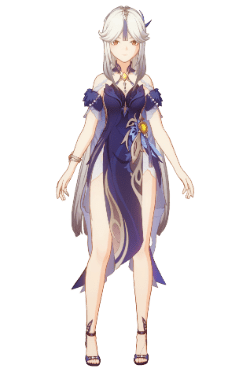