Summertime Sparkle is an Outfit or Cosmetic Outfit in Genshin Impact. Outfits for Genshin Impact are an equipment category of the game that are usually featured in special events or purchased via the Character Outfit Shop. These change the appearance of a Playable Character that can be previewed and worn in the Dressing Room. Outfits are purely cosmetic, and add no real stats or strength to any character that has them equipped, meaning they are not helpful in progressing the game.

Barbara's beach attire. This pretty skirt brims with summer vitality and carries with it a cool ocean breeze.

How to Unlock Summertime Sparkle Outfit in Genshin Impact

Listed below are some unique voice lines of Barbara when they are wearing their character outfit, Summertime Sparkle.

Barbara's songs and dances are meant to heal everyone's hearts.
But sometimes, even Barbara, who brings smiles onto everyone's faces, will herself feel down.
She, too, wishes to hang out with close friends and spend quality time with her family, much like any other girl her age.
These small wishes seem simple to anyone else, but they are a luxury for Barbara.

As an idol, she is often surrounded by zealous fans when she goes out.
And when she can steal moments to be with her family, the time she can spend with her parents and sister is ever so brief.
Her brilliant, busy sister is often stuck to her desk due to official business, and every time Barbara wants to go to her to share her feelings, she is silenced by the mountain of work piled in front of Jean.

Her sister's exhaustion is plain to see, and Barbara sees it too.
It can't be helped: Jean Gunnhildr is everyone's Acting Grand Master.
"But... could you just... give me my sister back, just for a while?"
Barbara says this to herself while watching her busy sister.

And that was when she heard a rumor about a strange archipelago.
Summer, islands, the ocean... could this be her hard-come-by opportunity?
Summer meant refreshing drinks, sweet icy desserts, and golden sands, azure seas, and people playing in the water.
The sand... the sea... Yes! So it was decided.

But a seaside trip requires preparation.
Snacks, sweets... ah yes, and Spicy Dried Fish, too. All this, she placed into her cute yellow ducky bag. ♪
Oh, and let's not forget clothes! I'll need some light and comfy swimwear. This short skirt looks good — and those little white flowers lend a playful look to those shoes! ♪
And perhaps a little bow tied around the neckline, would that look cuter?
Barbara began to hum happily to herself: La~ la la la la~ la la! ♪

But there was no way her sister would have time to prepare any swimwear for herself, would she?
That was quite the pickle... Still, there were ways around that.
Barbara pushed the door of the library open with a smile. "Do you have time, Miss Lisa? I'd like your help with picking a set of clothes." 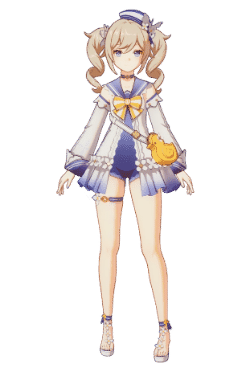