The ancient ritual grounds were buried beneath the earth amidst a cataclysm that tore heaven and earth asunder before being uplifted by the descent of an alien object, and finally unveiled by a destructive battle that resulted from a betrayal. Nonetheless, those who once frequented this place are no more.

Where to Find The Lost Valley in Genshin Impact 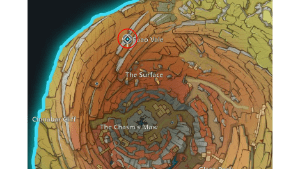 The Lost Valley can be unlocked by using the Travelers Geo Resonance in the area.

Place the first Geo Construct in front of the tablet of the Domain.

Place another Geo Construct equidistant from the first one and the large Geo rock.

Use a strong attack against the Geo rock to create shockwaves that connect to each construct, and thus opens the domain cave entrance.

The Lost Valley rewards players with the following: