Genshin Impact is an open-world, action RPG developed and published by miHoYo for PC, PlayStation®4, and iOS/Android for mobile. It is a Free-to-Play game that features a Gacha monetization system in the form of Wishes. Players can explore the game's large world called Teyvat with over 20+ characters and discover various points of interest and secrets that are spread across the map. Genshin Impact features an action-combat playstyle with classic RPG mechanics, the game also allows players to create a party of up to four playable characters that can be used and swapped on the fly to execute deadly and exquisite combos. 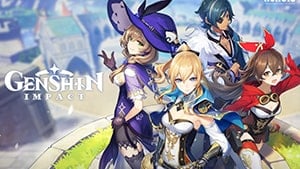 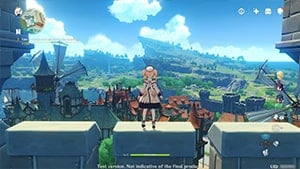 A New World - About Genshin Impact

Teyvat is a fantasy world where the seven elements flow and converge. In the distant past, the Archons granted mortals unique elemental abilities. With the help of such powers, people formed a bountiful homeland out of the wilderness. However, 500 years ago, the collapse of an ancient civilization turned the universe upside down... Though the calamity the world suffered has ceased, peace has yet to be restored.

You and your sibling traveled to Teyvat from another world. Separated on arrival, and now stranded here, you set about searching for answers from "The Seven" — the gods of each element. Along the way, you will freely explore this wondrous world, join forces with a diverse range of characters, and unravel the countless mysteries that Teyvat holds.

But when you learn of an ancient threat now facing this world once more — will you, an Outlander, be the one to stay the flames?

Genshin Impact is available on the following platforms, on the PC, PS4, PS5, and can be played on mobile.

The Switch was released during the development of Genshin Impact. The official release date for its availability on the switch is yet to be announced, though a Switch trailer for Genshin Impact can already be found on their official youtube page from January 2020, so its safe to assume its on the way.

The Version 2.5 update is set to rollout around February 16, 2022 if miHoYo sticks to their relatively consistent update schedule usually every 6 weeks, though this is yet to be confirmed.  This update is expected to feature all new items including available characters, all new events, equipment and rewards. A confirmation on the specifics and official announcements are expected to be made during the first week of February 2022, around 2 weeks before the update. After the coming updates, players can also claim 300 Primogems within 30 days of the maintenance completion to compensate for the game downtime.

Genshin Impact that is developed and published by miHoYo was released on PC,  PlayStation®4, and iOS/Android on September 28, 2020.

Check out our other Wikis: