Builds and Character Guides in Genshin Impact is s compilation of build and guide recommendations and suggestions which includes some builds shared by the community. A crafted build is a combination of stats to focus on, Weapons and Equipment, information on Talents, and Genshin Impact Characters formed to create a compatible set ideal for different gameplay styles.  Elnawawi from the community has shared a few of his build guides and recommendations and have been included in the articles below.

Which Build is Right for you? 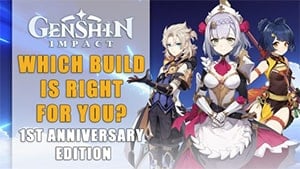 For help on deciding which build is right for you click here. 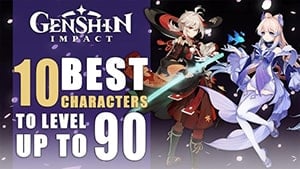 For our top 10 character guide on the best Genshin Impact characters to level up click here.

Genshin Impact Builds will recommend character to consider when creating the build and will feature a set of Weapons and Artifacts to completement their abilities and Talents in order to maximize team DMG and ability effectiveness. In this page you will find a list of the different character and their recommended builds that include full party guides, why they were chosen and what that means for the overall build. Since this is a Gacha-type game this page will feature multiple combinations, flexible F2P options so that all players can create an effective easy build with what they have available. Characters, Weapons and Artifacts can swapped around to better suit each players preferences and playstyles. These builds were created as guides or starting points for ideas especially for beginner builds so that other players may create their own and share their ideas.

Build Guides and Tips for starting a Genshin Impact Build: 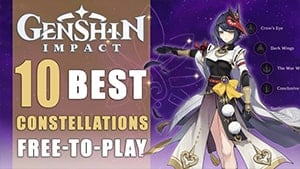 This is not intended as a tier list, nor a character power ranking but recommendation on resource management, and a way to maximize the gain from spending your hard-earned Primogems. Due to the high cost of Constellations especially targeting more copies of a certain character, it’s usually not advised to spend Primogems chasing them, even for four stars in my opinion. That’s not true for every character though, so the list is meant to narrow down which Constellations are really worth summoning. If you’ve been looking for whom to spend your very last resources on, then this guide is for you!

This video covers the different explorable features within the Open world of Genshin Impact, information on different elements and parties,  Cross Progression and Cooperative Play information and general thoughts on the gameplay and progression of the game.

This starter guide contains all the basic information new players may have questions to at the start of the game, touching on information about which platforms it is available on, controller compatibility, what to focus on at the start of the game, what players will discover when discovering the different locations, Playable Characters, How to level up, different types of loot and equipment, cooking guides and other details that players might find useful. 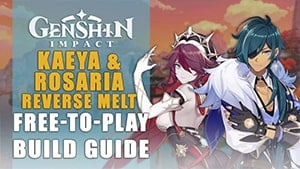 This is a budget-friendly version of quick-swap team builds, making it suitable for new and free to play players. It’s designed to just cycle through the entire team, casting elemental skill and elemental burst on cooldown. That goes without stopping to do normal or charged attacks, nor stopping to collect elemental particles on same character. The damage of this team accumulates to great heights, thanks to several characters doing damage. 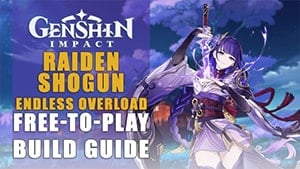 This is a budget-friendly version Raiden Shogun build, making it suitable for new and free to play players. Even though Raiden’s strongest attacks are her burst mode, it requires a massive investment, that’s not that accessible for free to play players. On top of that, most of Raiden Shogun‘s Burst potential is locked behind C2 and C3. Such constellations for a five-star character takes more than 500 wishes on average, and up to 650 if you are unlucky. That amount is far beyond any free reward the game grants you; I don’t encourage spending hard-earned money to just unlock the damage potential of just one character. Especially if there we can make a build that will rely solely on her Elemental Skill and reactions which require no Constellations. 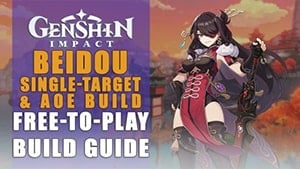 This page shows off a wolf of land and sea build by Elnawawi. It relies on Proccing Beidou‘s Elemental Burst the maximum number of times, using the rapid normal attacks of Kokomi. Beidou covers mostly the AOE aspect of the team, and then we add Albedo to emphasize it further. This team has Geo resonance, adding global damage modifiers to all team members, whether they are Geo, Electro, or Hydro. 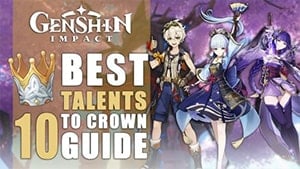 This is a top 10 Talent list by Elnawai. Due to the large roster of characters (42 playable characters as of patch 2.2), with each character having three talents; so the list is meant to narrow down which Talents are really worth crowning. If you’ve been looking for the best buffs, DPS and support Talents out there, then this Guide is for you! 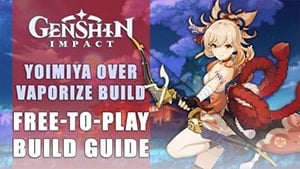 In this Genshin Impact Guide Elnawawi shows off his Over-Vaporize Build for Yoimiya, which specialized in single target DPS with Yoimiya’s Normal Attacks. It relies on Proccing both Overload and Vaporize reactions at the same time when Yoimiya applies Pyro on enemies affected by both Hydro and Electro. 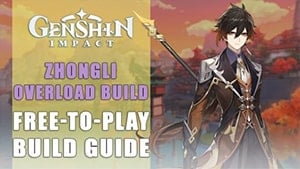 This Genshin Impact Guide features an Overload Build for Zhongli. It’s suited for both Abyss, and exploring Inazuma. This is a flexible build, that can be done in several ways, and it utilizes Zhongli as a driver for several off-field characters. We will build two Electro characters for DPS, and one pyro character for Overload reaction. Then we aim to optimize the character picks, to have them buff Zhongli damage in return.

Genshin Impact: Which Build Is Right For You? 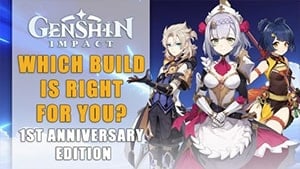 In order to celebrate the first anniversary of Genshin Impact, I thought it would be a good idea to put an index guide for the builds I have made, and help players choose the right one for them. It isn’t always straightforward how to pick the best build for you or your team, as it involves a lot of factors. - Elnawawi 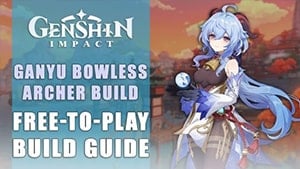 In this Genshin Impact Guide I’m going to be showing you my Bowless Archer Build for Ganyu, which can output insane Reverse Melt damage without using bow attacks. Even though Ganyu is a Bow user, with an insanely strong Charged Attack, we can make a build that will rely solely on her Elemental Skill and Elemental Burst alone. 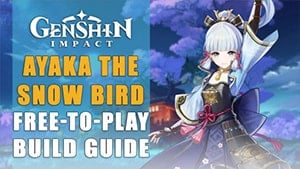 This Ayaka The Snow Bird Build utilizes the consistent Cryo application from Ayaka to keep enemies in permanent freeze. Even though she’s a sword wielder, Ayakai imbues all her attacks with Cryo, and plays like a snow princess. Ayaka plays on melee range, but has decent AOE. 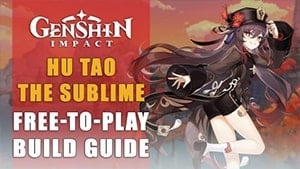 This Sublimation Build for Hu Tao outputs insane amounts of burst damage. Hu Tao‘s burst is rivaled by no other character, and depending on the content, she can deal the highest damage in-game. To emphasize her DPS, we pair her with the best Hydro support characters, for Consistent Vaporize reaction. 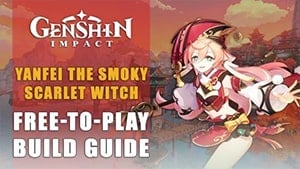 Smoky Scarlet Witch Yanfei Build, which utilizes Pyro element in a very unique way to tackle all content in-game. As a Pyro Catalyst wielder, Yanfei shoots pure fire, and plays like a wizard or a witch. Yanfei is a ranged character, with a very good range, and decent AOE. That makes her a good choice for an Overload build with Electro characters. 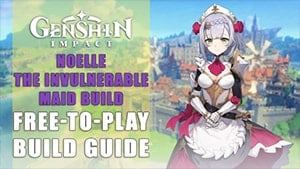 This is an Invulnerable Maid Build for Noelle, for Abyss, and exploring Inazuma. This is a flexible build, that can be done in several ways, and it utilizes the Geo element to its maximum potential. 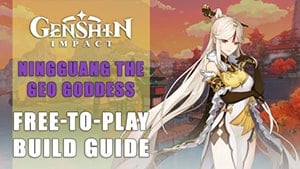 In this Genshin Impact Guide I’m going to be showing you my Geo Empress Build for Ningguang, that utilizes Geo element to its maximum potential. We build two Geo characters for Geo Resonance, that’s good in 1.2 version, and getting buffed at 1.3. Composing a party for each situation in Genshin Impact can be a bit of a challenge, with the limited options for those focusing on free-to-play. 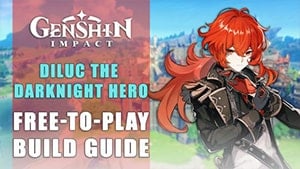 In this Genshin Impact Guide shows a Darknight Hero build for Diluc, that utilize Chongyun‘s Cryo skills and Barbara‘s Hydro to setup enemies for massive “Amplifying reaction” such as Melt and Vaporize, with the Pyro talents of Diluc. Composing a party for each situation in Genshin Impact can be a bit of a challenge, especially with the limited options for those focusing on free-to-play. 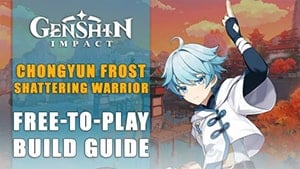 In this Genshin Impact Guide I’m going to be showing you my Frost Shattering Warrior build for Chongyun, that utilizes his Elemental Skill to freeze every enemy, and then shatter them for additional damage. Composing a party for each situation in Genshin Impact can be a bit of a challenge, especially with the limited options for those focusing on free-to-play. 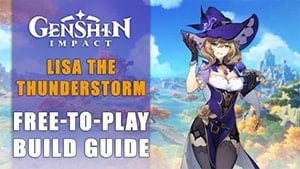 So in this Genshin Impact Build: Lisa The Thunderstorm Beginner Guide, we’re going to be taking a look at a party composition around Lisa, creating a good starter build for exploration, playing the main campaign quests, as well as choosing characters which will best complement her playstyle. 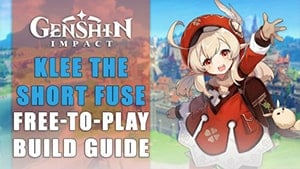 In this Guide I’ll explain just how to make a premium damage dealer out of Klee, that can be used for open world exploration and mining, and as a second party in Spiral Abyss. It syncs well with my previous party build: Razor Incredible Wolf, and can swap supports between the two parties easily to suit each floor in Spiral Abyss. 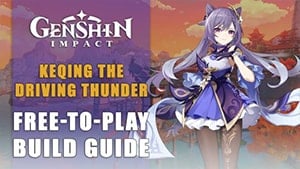 In this Genshin Impact Guide I’m going to be showing you my Driving Thunder Build for Keqing, which uses her Electro element in conjunction with Pyro element from team mates to cause massive Overload explosions. Such explosions are able to stun and knock back enemies, as well as destroying Abyss mages shields in the deeper levels of the Spiral Abyss. 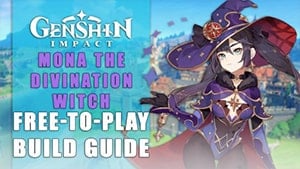 So in this Genshin Impact Build: Mona Divination Witch Guide, we’re going to be taking a look at a party composition focusing on Mona. She was the first five star character I got in a free to play playthrough, after 76 wishes on the standard banner. 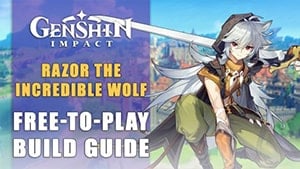 This is an Incredible Wolf Build for Razor, which uses Normal Attack infused by Electro and Rain Swords infused by Hydro to inflict enemies with Electro-Charged constantly, or kill them outright. 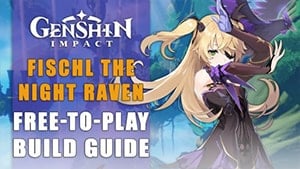 In this Genshin Impact Build: Fischl The Night Raven, we’re going to be taking a look at a party composition around Fischl, creating a good Dungeon farmer build for Spiral Abyss, Abyssal domains, and all weekly and world bosses. As well as choosing characters which will best complement her playstyle. This build will be suitable for mid to current endgame content.