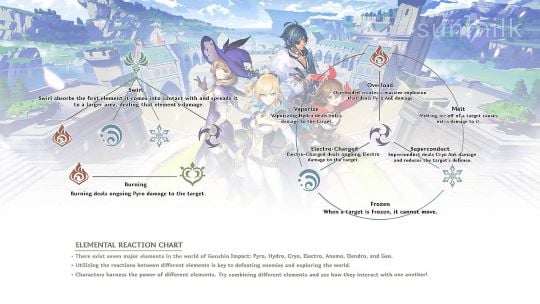 There are 7 Elements in the game and each Playable Character harnesses a unique element. These elements are:

Here is a list of negative status effects that are applied to Enemies and to the players. First off, Enemies:

And for the Players, here is a list of the effects that can be obtained:

In Genshin Impact, you will encounter various enemies and bosses that are strong against certain elements, but at the same time, are weak to some. It's not about attacking your foes with your weapon, but you'll need to learn how to combine elements to execute a strong combo by yourself or with your friends in multiplayer. Some examples include the following:

Once you reach Mondstadt, you'll be able to use your first Wish, and if you're lucky, apart from Amber being your first free party member, you might get 2 or 3 new playable characters that you can add to your active party. In Genshin Impact, you can select 4 playable characters to your team which you can then freely use and switch at all times during exploration and battle. Whenever you form a team, make sure to go to the Party Setup menu and check Elemental Resonance. You will find details on Party Passive Bonuses you can acquire depending on the members you've added to the party.

With the attack button, depending on the weapon that is used by your playable character, you can usually execute a string of combos of up to x5 hits. Some characters can execute up to 5 hits such as sword-wielders, while others like the catalyst can only perform a combo of up to 4 attacks. Basic attacks do not consume stamina, however, if you press and hold the attack button, you can execute a charged/strong/heavy attack that consumes stamina.